Learning From My Daughter & The Big Friendly Giant

Learning From My Daughter & The Big Friendly Giant 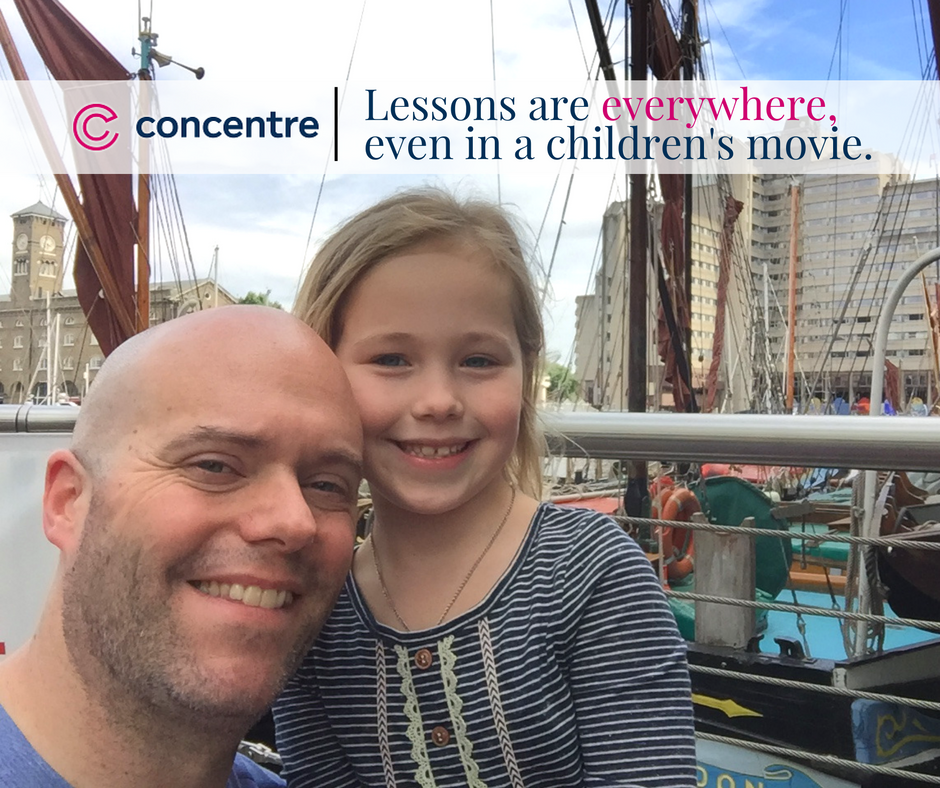 Lately, I’ve been practicing the art of stacking activities. Unlike multitasking—which divides our attention among several disparate jobs—stacking involves creatively combining tasks in a way that can enhance productivity without compromising focus or quality.

Case in point: I enjoy sharing my experiences through posting articles. I also want to spend as much downtime as possible with my children. In particular, I like seeing movies with my eight-year-old daughter and discussing them afterward. On our latest outing, we saw Steven Spielberg’s production of the Roald Dahl classic The BFG (Big Friendly Giant). Sensing an opportunity to combine daddy-daughter time with collecting fodder for my next blog post, I asked my daughter to share her thoughts on the film. Our conversation proved that lessons are everywhere—even in a children’s movie.

In The BFG, seven-year-old Sophie musters the fortitude and leadership to rid the entire UK of man-eating giants. To do that, she enlists the help of a so-called “lesser” giant—and the British Army, the Royal Air Force and the Queen of England herself.

It’s an excellent analogy to life and business. But rather than pontificate on the connections between fairy tales and IT transformation (even the very obvious ones!), I’ll let my daughter’s takeaways do the talking. Here are her observations:

Some people can’t help, but they can cheer.

Even people who strongly oppose change can contribute in their own ways. After all, good leaders recognize that questions—even openly critical ones—show interest. If people didn’t care, they wouldn’t bother to speak up. In that way, criticism can be viewed as an effort to help. We can all do well to understand how each person is valuable to any endeavor. Even if some are unwilling to actively participate, they can still provide input, feedback, and insight.

Think about the classic advertising campaign for Avis. The car rental company was losing market share to Hertz, and they came up with a brilliant strategy to win back the hearts and minds of consumers. It started with a simple idea: “When you’re #2, you try harder.” The company embraced its underdog status—and turned it into a competitive advantage. In The BFG, our heroine Sophie could easily have been a light snack for one of countless giants. Instead, she befriends an outlier—and together, they conquered a scourge that threatened all of England.

If I’m nimble, focused and feisty, what can I achieve?

The BFG also shows what’s possible when we summon our own innate abilities. Each of us is capable of being agile, determined and courageous in varying degrees. The trick is to accept our capabilities and limitations—and to be resourceful in filling the gaps. We must identify the champions and cheerleaders around us—and set reasonable expectations for their contributions. Then, by working together, we can combine our efforts (or “stack our activities”)—and achieve amazing things.

Postscript: With the recent passing of Gene Wilder, who famously portrayed Willy Wonka in the film adaptation of Charlie and the Chocolate Factory, the weird and fascinating works of Roald Dahl are once again in the cultural spotlight. Some of Dahl’s other novels include The Gremlins and James and the Giant Peach. Dahl also wrote screenplays for You Only Live Twice and Chitty Chitty Bang Bang, both based on novels by Ian Fleming.

The “nimble, focused and feisty” mention above references a concept from Sara Robert’s new book that I recently read Nimble Focused Feisty: Organizational Cultures That Win in the New Era and How to Create Them. Definitely a good read!