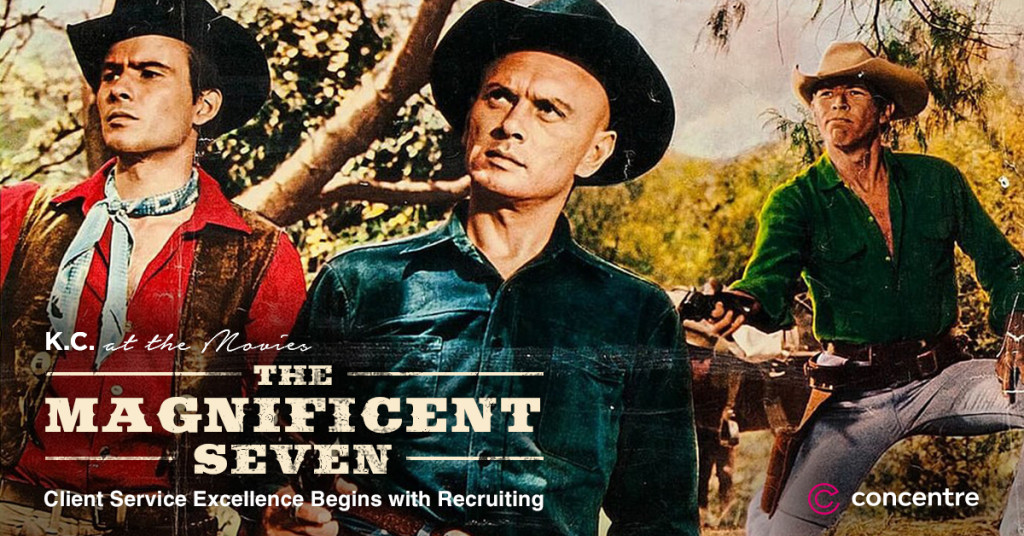 “The Magnificent Seven”—starring Yul Brenner and Steve McQueen—is one of my all-time favorite films. I watched the 1960s classic again recently, and it struck me as an allegory on the importance of recruiting. At Concentre, we strive to consistently deliver excellence. To do that, it takes talented people aligned around common goals and principles. In “The Magnificent Seven,” the residents of a small village under siege soon discover how the right team can make all the difference.

As the film opens, the villagers face a difficult choice between paying a group of marauding bandits to go away or fending off their persistent attacks. It’s a classic risk management dilemma—not unlike some of my clients’ software maintenance renewals.

Initially, the residents choose to band together and resist the outlaws on their own. Two of the local men set out to buy guns in a nearby town. When this “selection and procurement team” stumbles into a conflict with some local thugs, they’re surprised to get help from two mysterious mercenaries: Chris (Brenner) and Vin (McQueen).

The grateful villagers approach Chris about buying weapons. Chris explains that they’d do better to retain professional services (i.e. his) as opposed to simply buying the tools to do-it-themselves. Chris tells the villagers they need to build a team, to which they respond:

I sat forward with intense focus. Chris was assembling a team of seasoned professionals to tackle a difficult transformation. He needed a mix of gunfighters, sharpshooters, and a knife thrower. It dawned on me that the gunslinger and I faced the same leadership challenges—albeit, in different domains.

One-by-one, Chris carefully vets each candidate. Several applicants claim to possess the skills, but a few simple tests weed out those who lack the nerve, the skill, the speed or the mastery required for success. During this selection process, Chris shares another gem:

Each individual who enlists in the Magnificent Seven has a unique motivation for doing so. My favorite is Vin, who leaves a steady job in a grocery store for a risky adventure with long hours and travel. Even in the Old West, consulting attracted those who prefer a challenge.

Finally assembled, the Magnificent Seven travel to the “client site” to assess the situation. They develop a plan, introduce new technologies, and commit their energy. They engage in knowledge transfer—training the client to a higher level of proficiency. Inevitably, there is backsliding, but it’s mitigated through change management techniques. At one point, when things look bleak and the Seven consider quitting, the following dialogue ensues:

The team stays engaged and committed. In the end, the villagers and the Magnificent Seven succeed in a difficult but worthwhile implementation.

Like Chris, Concentre seeks a magnificent team. We are relentless in vetting professionals with the skill, the will, and the talent to consistently elate our clients.

Again and again, Hollywood tells the story of disparate groups being honed into high-performing teams that succeed against all odds. If Westerns aren’t your thing, try: The Wizard of Oz, Star Wars: A New Hope, The Lord of the Rings, or The Blues Brothers—who famously “get the band back together.”

Want to recommend a film for Kevin Christ? Let him know in the comments.