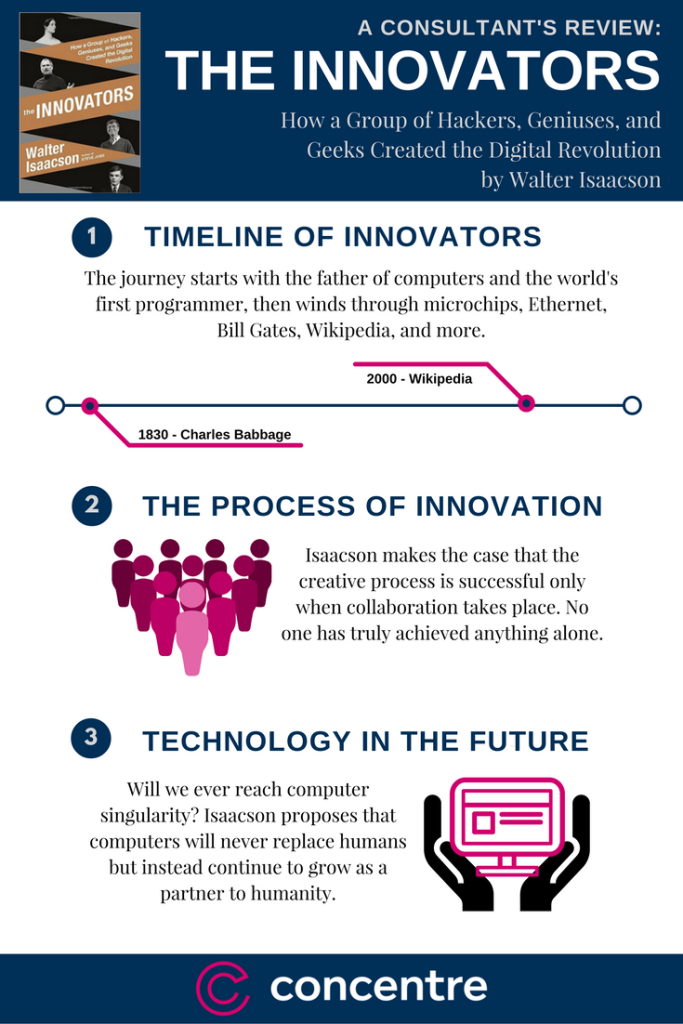 An inspiring and fascinating walk through the history of computing made much more interesting by Isaacson, who adds insight on the pioneers, hackers, inventors, entrepreneurs and their often unique and quirky personalities.

The journey starts in the 1830s with Charles Babbage (often credited as the father of the computer) and Ada Lovelace (considered the first computer programmer) and winds through Hollerith’s punch card tabulator, ENIAC the first general purpose computer, AT&T’s Bell Labs, the development of the transistor and microchip, Xerox’s PARC (origin of most electronic innovations in the 1970s), the Atari, Ethernet, the mouse, Intel, Alan Turing, how the Internet/World Wide Web evolved, Bill Gates, Steve Jobs, Steve Wozniak, DOS and Windows, Apple, the creation of email, The W@LL, Linus Torvalds and Linux, Web logging (the precursor to Blogging), Google, Wikipedia, IBM’s Watson and so much more!

The Process of Innovation: Revolutionary or Evolutionary?

Throughout the book, Isaacson espouses how he believes innovation happens in the real world. He makes the case that innovation and the creative process is successful only when collaboration takes place and that no singular individual has truly achieved anything alone. He professes that innovation is not from revolutionary ideas but more so from our expansion of prior ideas – thus, it is an evolutionary approach. He uses a recent quote from Evan Williams, one of the co-founders of Twitter, to sell his point, “People don’t invent things on the internet. They simply expand on an idea that already exists.”

The Future of Technology

In the last chapter, Isaacson submits an interesting view on how he thinks computers will evolve as we move into the future. He builds a strong case that in the artificial intelligence domain; we will most likely never reach computer singularity. Singularity is the point where computers are not merely smarter than humans, but possess the ability to design themselves to be smarter. Isaacson submits a more plausible path, where humans and computers both continue to get smarter together. He proposes that computers will never replace humans but instead continue to grow as a partner or tool to humanity. Humans bring originality and creativity to the partnership, whereas computers bring the ability to complete brute force tasks, like finding correlations in hundreds of Wikipedia-sized information repositories.